ENVIRONMENT, a unique place to spend your best vacations.

The Camping is located in Cambrils, in the heart of the Costa Dorada, and both the city and its surroundings offer you a huge multitude of activities to do and places to visit.

Beaches of fine golden sand if your thing is to enjoy the sun, the Port Aventura theme park in which the little ones, and also the big ones, will enjoy in a big way, with new attractions every year.

Aquopolis water park, do not miss it if you like water, it also has Dolphinarium.

That without forgetting what a millenary zone can offer you at a cultural level, such as Roman Tarragona, the modernist Reus or if you like nature you can discover the Ebro Delta or the Montsant mountain area, the Cistercian route, the wine route in el Priorat, … ask for information at the Reception.

Everything you can visit and do

Discover all that the Costa Dorada offers you to enjoy your family vacation.

Maritime city and family tourism destination offers you a quiet place, with a renowned cuisine, magnificent beaches of fine sand and a perfect climate.

The Ardiaca beach is a fine is a fine golden sandy beach, with calm waters and located in a semi-urban area. Beach protected by breakwaters located off the coast. Good area for
snorkeling, you can find several species of fish. 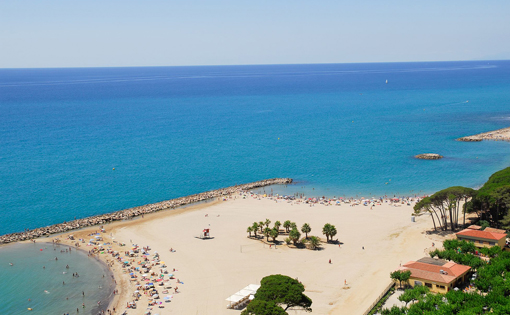 Esquirol beach is a golden and fine sand beach with calm waters and located in a semi-urban area. It is located on the outskirts of Cambrils, direction Salou. Distinguish
by its length It also has a lane adapted for cyclists and runners. 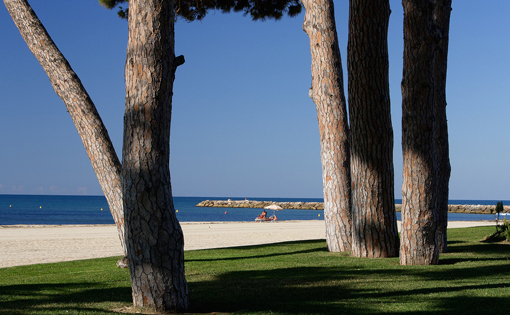 The Horta de Santa Maria beach is a golden sandy beach with calm waters and located in urban areas. Beach protected by breakwater facing the coast. You can take a peaceful walk alongits extensive walkway and even sport using its bike lane. 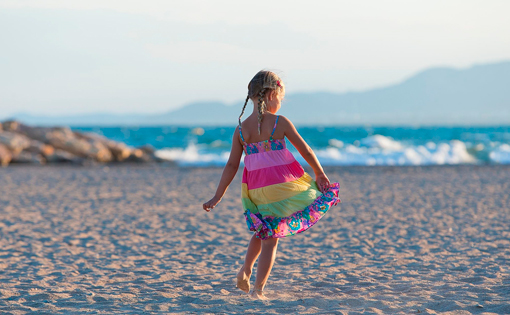 La La Llosa Beach is a fine golden sandy beach, with calm waters and located in a semi-urban area. Beach protected by breakwaters located off the coast.
For pedestrians and cyclists, on the Paseo Marítimo goes along the entire beach. Partially, it rises more than one meter above the level of the beach, so there is a perfect panorama on the beach and the sea. 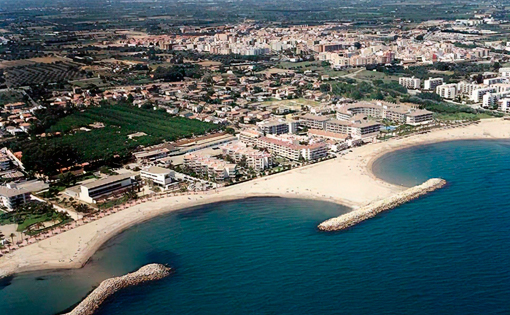 La Riera Beach is a sandy beach with thick golden walls and stones gruesa y con piedras, with calm waters and located in the urban area.
In front of the sand there are several baskets to play basketball. In addition, in the summer Small events and concerts are held related to outdoor music and exercise. 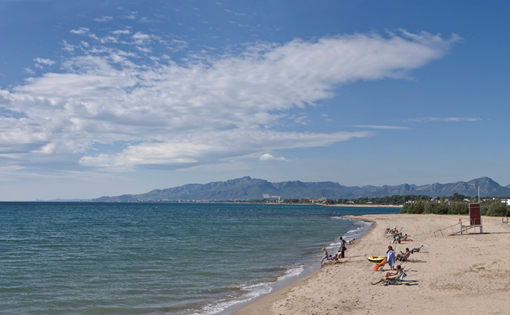 Vilafortuny Beach is a golden and fine sand beach, with calm waters and located in a semi-urban area. Located in the urbanization of Vilafortuny, it is annexe to Esquirol beach and the Poniente de Salou beach. It has of a lane adapted for riders and cyclists. 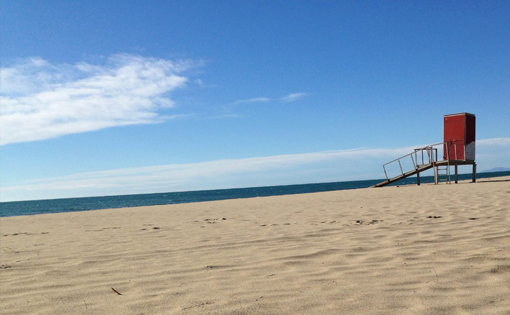 The Cap de Sant Pere beach is a golden and fine sand beach, with calm waters and situated in a semi-urban area. It is located next to the Playa de la Llosa beach in a very quiet area with some campsites for tourists. It also has a long bicycle lane intended for the use of cyclists, skaters and runners 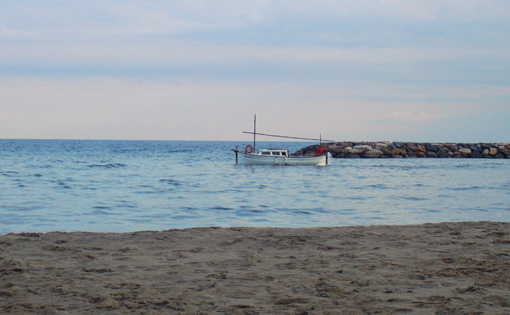 Platja del Cavet is a medium-sized golden beach with stones, with calm waters and located in a semi-urban zone. Located at the exit from Cambrils towards Salou, this beach stands out due to its beautiful sunset views to the entire coast of Cambrils. 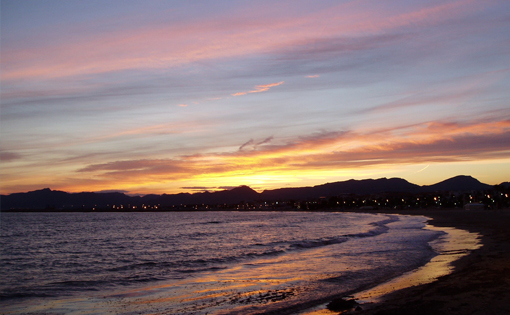 The Regueral beach is a golden and fine sand beach, with calm waters and located in urban areas. It is the most important beach in Cambrils and is located in Av. Deputation, main avenue of the town. In the summer season, water platforms designed for children are placed in the water. 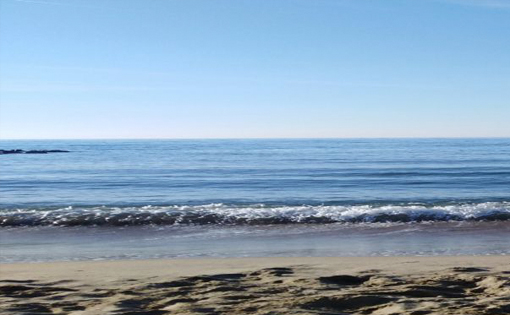 It was the first park in Cambrils and it was made in memory of the fishermen. It is located next to the port and in front of the beach.

It is a park of approximately 5,000 m2. The park is a mixed park, that is, a Mediterranean park in the south and tropical zone in the central area.

The park consists of three recreational areas for children and a stage where many musical activities are performed and Holidays, with changing rooms and a bar.

The most intimate part of the park is the pond surrounded by eucalyptus. 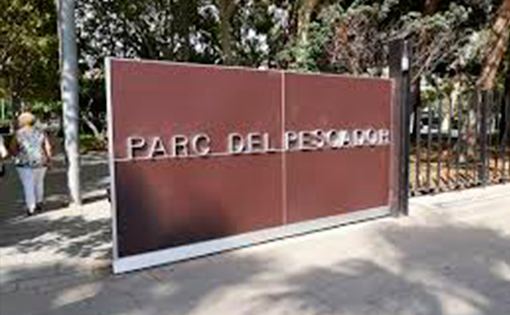 It is the largest and newest park in Cambrils and covers an area of 4.5 hectares.

The park is structured in 4 zones: a paved public square, where there is a photovoltaic pergola and some stands for outdoor activities, a green classroom that recreates an agricultural plot for the study of different autochthonous species , a forest area with picnic tables and walking paths and a play area for the little ones and road education. 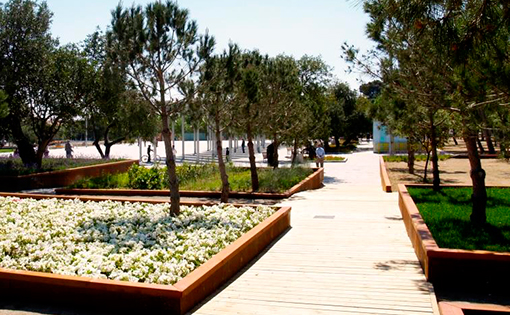 The children’s traffic park is located in the Parc del Pinaret (Phase 3), in the city of Cambrils.

Inaugurated in February 2011. It is a park especially suitable for children between 7 and 11 years old.

It has vertical and horizontal signaling, double and single-way streets, roundabout, skating, climbing wall, etc …, and is designed and located so that it can be used by mothers and parents who want to teach their children, as well as for the practical classes that Camarillo Local Police School Agents perform every year, since the creation of the Road Education unit in 1991. 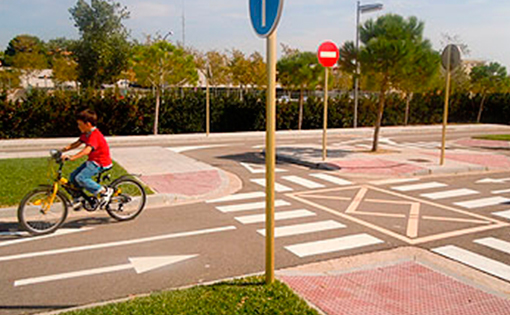 Mill of the Three Eres

The Molí dels Tres Eres Museum is the main headquarters of the History Museum of Cambrils.

In addition, you can also discover a spectacular hydraulic flour mill in operation, the few that are still active in our counties, thanks to a faithful rehabilitation already completed 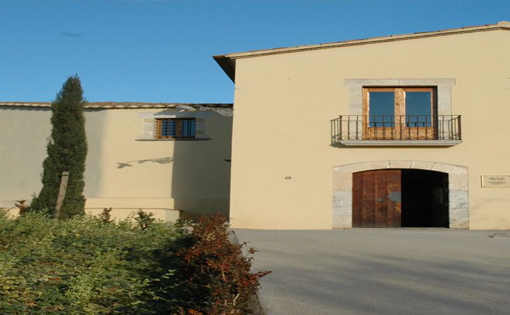 Vigilance tower declared a Cultural Good of National Interest for its good state of conservation, due to its impressive height and historical interest 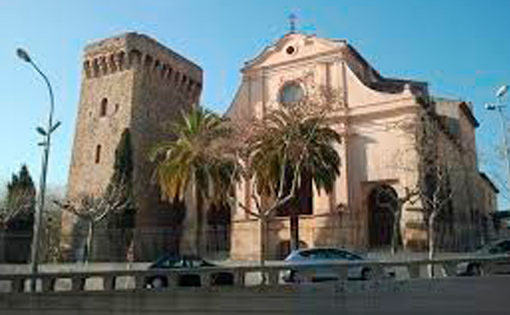 Watchtower of the seventeenth century that served to defend against pirate attacks. Located in front of the port, it is part of the famous coastline of Cambrils.
It is currently used as a temporary exhibition hall especially related to maritime heritage. 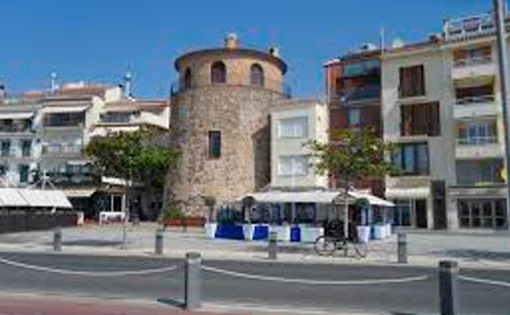 Spaces of the Civil War

Tourist route to know the spaces of Cambrils that were protagonists during the civil war. The visit ends at the anti-aircraft refuge built to protect the civilian population from air strikes. 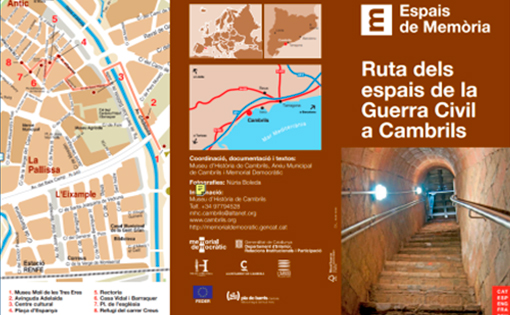 The neighborhood of the harbor hides many places and trades that are discovered along a pleasant walk through Cambrils, a clear example of pairing between a marina and a fishing port. The visit allows access to the Torre del Port, a symbol of the municipality. 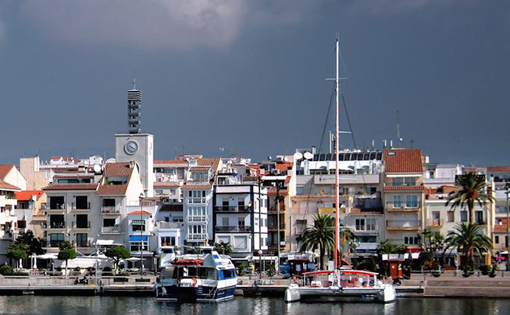 L2 Tour through the Market On Wednesdays, the Tourist Train will take you to the weekly market in the old town.

L3 Tour de Ponent Circuit for the Ponent area to know a part of the well-known town of Cambrils. 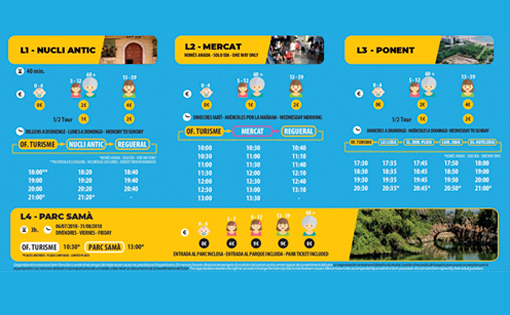 You can find Cambrils cycling the bike lanes in the city center. To do this, at the Tourist Office you can ask about the map of the bike lanes network.

In addition, the most trained to do kilometers can ask for the maps of bicycle itineraries along the Costa Daurada, starting from Cambrils. 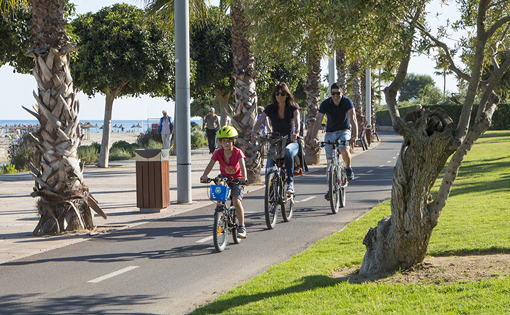 You can find Cambrils and its rural area in BTT. For this, at the Tourist Office, you can ask about the map of rural roads.

In addition, the most trained to do kilometers can ask for the maps of bicycle itineraries along the Costa Daurada, starting from Cambrils. 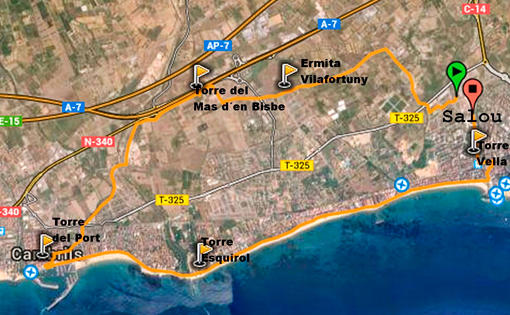 Ecotourism routes are a network of routes for lovers of sightseeing or cycling and allow you to discover the natural and cultural values that are part of the heritage of Cambrils. For this, at the Tourist Office you can request a catalog of the Network of Roads on foot and in BTT.

It is one of the characteristic elements of the port of Cambrils. It serves as a reference for guiding boats during the night and is located at the tip of the pier.
It is a must for lovers of good photographs, as you will enjoy wonderful sunsets as well as the daily life of the fishermen. 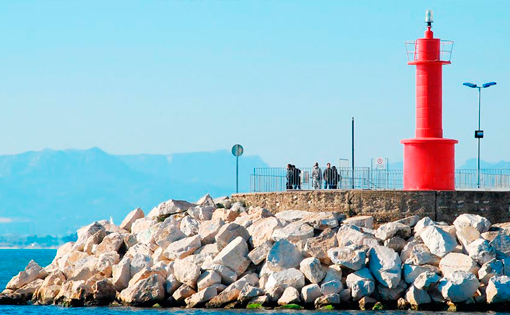 Centennial tree declared as Local and Regional Interest.
It is the seafront promenade and is a point of reference for its natural uniqueness. 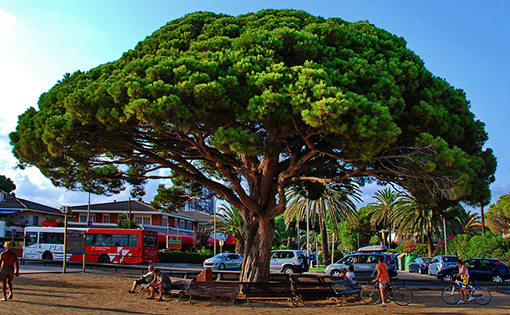 19th century tower built to optimize the communications of the time through optical telegraphy.
It is one of the best preserved in the State. Since 2005, it has been assigned to the History Museum of Cambrils. 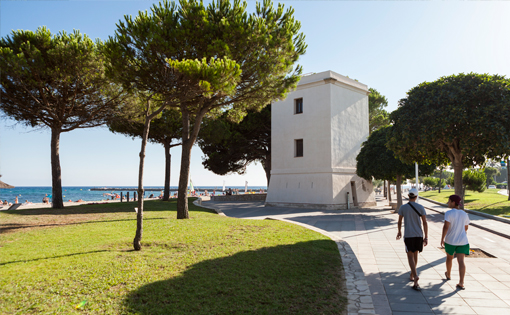 Watchtower of the 17th century that served to defend itself from pirate attacks. Located in front of the port, it is part of the well-known Cambrils coastline.

Neuralgic space located in front of the Torre del Port, right in the center of the Port of Cambrils, also called “Escales Reales”.

A place where traditionally numerous meetings, events and social and festive events are held. In 2011, the sculpture of the renowned artist David Callau Gené was inaugurated, titled “In the Pla de les Serenes”.

Sculptural ensemble made of Corten steel, ceramic and stainless steel, commemorating the centenary of the Year of Misfortunes (1911-2011) in which many fishermen from the Catalan coast, several of them from Cambrils, died. TO THE PLAIN OF SERENES.

A sculptural ensemble made up of three fishermen representing the souls. In their hands they bring two fish baskets to sell, as it was done in the past.

Two sirens of majestic altitudes that symbolize the bonanza and the storm, La Dolça and La Calma of this sea. Metamorphic mythological beings also of the elements: The sun and the moon, determining at the time of going out to fish.

The little Adrián is the symbol of the present and the future, the note of color and tenderness. Childhood and innocence that observes the scene from a serenity plan. 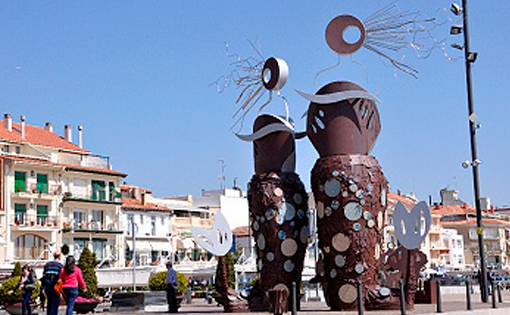 City with a huge commercial offer and, if you like architecture, a great presence of modernist building with an essential visit.

Ancient Tarraco shows you vestiges of its great Roman past that you can visit: amphitheater, walls, etc.

A natural refuge for wildlife and a unique place where the Ebro River flows into the Mediterranean. More information

Other Points of Interest

Spectacular botanical garden that retains all its romantic flavor of the old colonial style. Antonio Gaudi as assistant to José Fontser took care of the Grand Cascade of the park.


Subscribe to this newsletter and receive news and exclusive offers from our campsite.